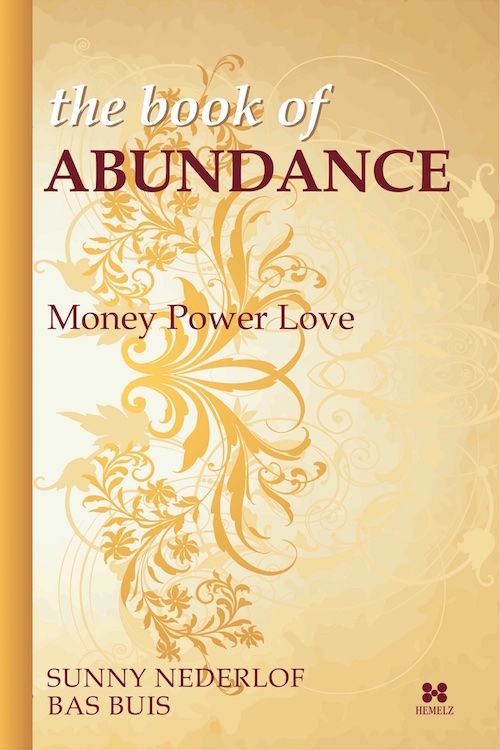 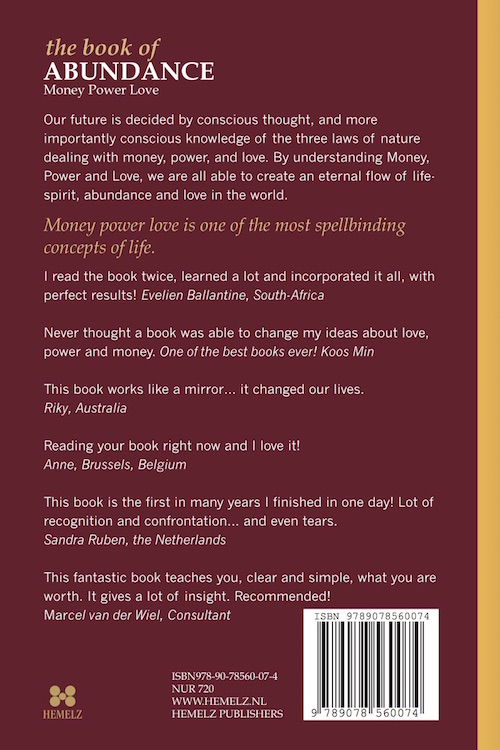 The Secret of Spiritual Abundance   Bring abundance into your life… on every level… The book of Abundance is about the secret behind money, power, and love. It is about the three laws of nature, which together form the driving force behind the elements that seem to be present in everybody’s daily lives. Lack and abundance are not “chance” circumstances that just happen to you… Our future is decided by conscious thought, and more importantly conscious knowledge of the three laws of nature dealing with money, power, and love. By understanding Money, Power and Love, we are all able to create an eternal flow of life-spirit, abundance and love in the world. It also reveals the connection between love, power and money that you previously never thought possible. Money power love is one of the most spellbinding concepts of life.

Success and abundance is within reach of everyone. From the very first time Money Power Love was a smash hit. It led to spontaneous new insights and it has been an eye-opener for many.

Bas Buis and Sunny Nederlof are metaphysical and spiritual counselors and inspire their students and readers in the field of healing, and inner wisdom.

I read the book twice, learned a lot and incorporated it all, with perfect results! Evelien Ballantine, South-Africa

Never thought a book was able to change my thoughts and ideas about love, power and money. One of the best books ever! Koos Min.

This book works like a mirror… it changed our lives. Riky, Australia.

Reading your book right now and I love it! Anne, Brussels, Belgium.

This book is the first in many years I finished in one day! Lot of recognition and confrontation… and even tears. Sandra Ruben, the Netherlands

This fantastic book teaches you, clear and simple, what you are worth. It gives a lot of insight. Recommended!
Marcel van der Wiel, Consultant

Explanation by the authors about wealth and shortage

Explanation by the authors about wealth and shortage

We regularly receive questions about this subject.

By abundance do you mean wealth?

Yes, wealth is an important part of abundance. We have chosen the concept of abundance because some readers think only of the element of money when they think of wealth and because we don’t want to give the impression that, for example, a billionaire would be better at generating this energy than someone who is not. For us, abundance means being able to generate that energy so that you can realize your wishes. Then you are also in a state of wealth, in our perception.

Someone told me it’s about the inner state of wealth or lack.

We can totally agree with that. Yoy state of being is eitehr in a state of being you are in a state of wealth (abundance) or in a state of lack. There is no gray area in between. Remember, however, that both have degrees within their state of being. The state of shortage is at least as popular as the state of abundance. Creating or maintaining deficits gives power; you can help others to overcome their shortage, get a house, get a job, guarantee a minimum subsistence through benefits, etc. Allways to come out stronger yourself, while constantly confirming others in their state of shortage. Deficiencies are always artificial. Why do people think that an education with a job guarantee is better, that there are too few houses in may left-wing countries, that you are only safe with benefits? Because there are plenty of ‘volunteers’ who will tell you that and, if you feel ‘free’ for a moment, will help you remember it. The Book of Abundance is there to tell you that you are great, free, with integrity and totally independent of these so-called truths. The Book of Abundance is there to tell you that you are already rich, already in abundance; as soon as you dare to leave the paths of lack. if you do you, will transform your state of being from deficiency to wealth, as easy as that.

Can you also abuse wealth?

Interesting question. Yes and no. Abundance or wealth has three forms; money, power and love. All three can be abused. From loverboy to politician and businessman. Someone who, despite his or her talent for generating this energy, has remained in inner wealth, will usually not abuse one or more of these forms.

However, there are (unfortunately) also examples of people who are so rich that they have come to feel superior over the years. Superior to the non-billionaires, superior als VIP’s to the unknown, superior to the common people (or ‘le peuple’ as the French put it so beautifully). Then their money has just become a super-drug, feeding their superiority on a daily basis, making them really think that they are not only rich but they also know better what is good for you, your children, society and the world at large. At that moment they often start some kind of foundation with which they will save the world, which usually means that they increase their power even more and earn even more money through an extensive network. That’s not abundance; that is the description of a sad state of deficit in someone, with an above-average talent for making money. No matter how rich they’ve become, they’re still poor, still proving that they’re okay. Maybe for their father, their mother or themselves.

Book of Abundance – where to buy

Buy your Book or eBook - individuals